You could almost hear the spurs jingling.

Trade tensions ratcheted higher last week as the United States and China staked new positions on the not-so-dusty main street of trade. It was the latest round of posturing in what has the potential to become a trade war between the world’s largest economies. Barron’s explained:

“The trade battle has escalated since President Trump announced steel tariffs in March. China retaliated to those tariffs with its own duties, and the resulting back and forth resulted in announced tariffs on $50 billion worth of goods on both sides. Late on Thursday, Trump also directed the U.S. trade representative to identify $100 billion more in potential tariffs on Chinese goods.”

It was unwelcome news in financial markets where one-upmanship created uncertainty and unnerved investors. Distress in stock and bond markets may have been exacerbated by analysts’ warnings about worst-case scenarios, including the possibility of China reducing its $1.2 trillion position in U.S. Treasuries and diversifying its foreign exchange reserves into other nation’s currencies, according to Financial Times.

American manufacturing businesses have concerns about supply chain and other issues that may be created by tariffs, reported Forbes. In addition, farmers are bracing for the impact of a potential trade war. The New York Times wrote:

“China’s aggressive response to Mr. Trump’s tariffs is aimed squarely at products produced in the American heartland, a region that helped send him to the White House. A trade war with China could be particularly devastating to rural economies, especially for pig farmers and soybean and corn growers. Nearly two-thirds of United States soybean exports go to China.”

Major U.S. indices finished lower last week for the third time in four weeks. The Dow Jones Industrial Average was down 10.1 percent from its January closing high. Technically, that puts the Dow in correction territory. 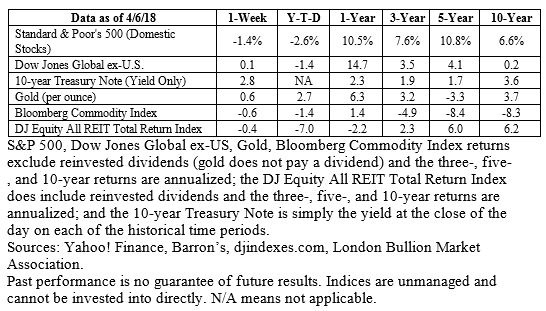 THE NOT-SO-SECRET MARCH MADNESS EFFECT. Have you ever wondered how students select colleges? Economic theory suggests, “Models of college choice typically assume that high school students are fully informed and choose to apply to and eventually attend a school that maximizes their expected, present discounted value of future wages less the costs associated with college attendance.”

It’s a good theory, if you’re an economist who believes people act in perfectly rational ways. Of course, there aren’t many high school students (or parents) who can explain the present discounted value of something, much less use it as a tool to choose a college.

The filters on college search tools include criteria that may be more relevant to the decision. College Board’s BigFuture online interactive guide asks students to consider their test scores – as well as a college or university’s geography, size, type, cost, diversity, and support services – among other factors.

Those other factors include college sports. As it turns out, the success of a school’s sports teams plays a significant role in the college selection process for some students. The Journal of Sports Economics published ‘Understanding College Application Decisions: Why College Sports Success Matters.’ It’s the work of economists at the University of Chicago(UC) who found:

Having a sports team make it to the Final Four is roughly equivalent to a college adjusting tuition or financial aid by 6 percent to 32 percent or moving halfway up the list on the U.S.News College Rankings, according to UC researchers.

“They say that nobody is perfect. Then they tell you practice makes perfect. I wish they'd make up their minds.”
--Wilt Chamberlain, American basketball player

* These views are those of Carson Group Coaching, and not the presenting Representative or the Representative’s Broker/Dealer, and should not be construed as investment advice.
* This newsletter was prepared by Carson Group Coaching. Carson Group Coaching is not affiliated with the named broker/dealer.
* Government bonds and Treasury Bills are guaranteed by the U.S. government as to the timely payment of principal and interest and, if held to maturity, offer a fixed rate of return and fixed principal value. However, the value of fund shares is not guaranteed and will fluctuate.
* Corporate bonds are considered higher risk than government bonds but normally offer a higher yield and are subject to market, interest rate and credit risk as well as additional risks based on the quality of issuer coupon rate, price, yield, maturity, and redemption features.
* The Standard & Poor's 500 (S&P 500) is an unmanaged group of securities considered to be representative of the stock market in general. You cannot invest directly in this index.
* All indexes referenced are unmanaged. Unmanaged index returns do not reflect fees, expenses, or sales charges. Index performance is not indicative of the performance of any investment.
* The Dow Jones Global ex-U.S. Index covers approximately 95% of the market capitalization of the 45 developed and emerging countries included in the Index.
* The 10-year Treasury Note represents debt owed by the United States Treasury to the public. Since the U.S. Government is seen as a risk-free borrower, investors use the 10-year Treasury Note as a benchmark for the long-term bond market.
* Gold represents the afternoon gold price as reported by the London Bullion Market Association. The gold price is set twice daily by the London Gold Fixing Company at 10:30 and 15:00 and is expressed in U.S. dollars per fine troy ounce.
* The Bloomberg Commodity Index is designed to be a highly liquid and diversified benchmark for the commodity futures market. The Index is composed of futures contracts on 19 physical commodities and was launched on July 14, 1998.
* The DJ Equity All REIT Total Return Index measures the total return performance of the equity subcategory of the Real Estate Investment Trust (REIT) industry as calculated by Dow Jones.
* Yahoo! Finance is the source for any reference to the performance of an index between two specific periods.
* Opinions expressed are subject to change without notice and are not intended as investment advice or to predict future performance.
* Economic forecasts set forth may not develop as predicted and there can be no guarantee that strategies promoted will be successful.
* Past performance does not guarantee future results. Investing involves risk, including loss of principal.
* You cannot invest directly in an index.
* Stock investing involves risk including loss of principal.
* Consult your financial professional before making any investment decision.