The U.S. Federal Reserve has been raising interest rates in anticipation of higher inflation.

In its 2018 forecast, Goldman Sachs indicated it expected to see “a gradual increase in global core inflation, albeit to levels that are still below central bank targets in most places.”

“Economists have raised the specter of inflation for several years, only to be disproved time and again. There’s reason to believe, however, that 2018 will be different – that prices will finally rise in a more sustained pattern, forcing stock- and bond-market investors to react to a new trend. ‘An unanticipated acceleration in inflation is probably the biggest risk for markets in 2018,’ says Larry Hatheway, chief economist at GAM Investments…Economists like Hatheway aren’t expecting runaway inflation, as in the days of disco and leisure suits, when prices rose by double digits. They’re girding for an annual increase of 2 percent to 2.5 percent at the most.”

Last week, data released by the Department of Labor showed U.S. inflation, as measured by the Consumer Price Index, ticked higher (0.1 percent) during December. With food and energy excluded, the index was up 0.3 percent. Shelter, which reflects the cost of rent, rose the most (0.4 percent). The indices for medical care, new vehicles, used vehicles, and vehicle insurance all increased during December.

Some publications are predicting December’s uptick in inflation will lead to a March rate hike by the Federal Reserve. It’s difficult to say with certainty, however, until January’s inflation report is released on February 14. 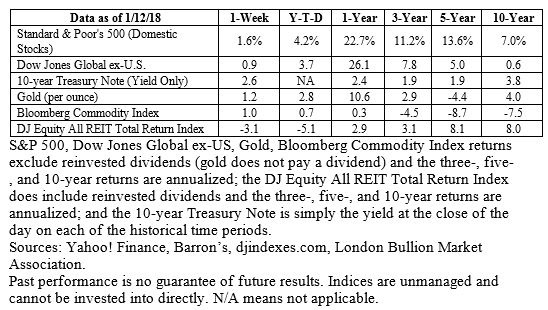 It’s interesting to note the lifespans named by survey respondents generally matched to some scientists’ predictions about the hardiness of humans. One of the authors of a much-debated article in the journal Nature reported, “It seems highly likely we have reached our ceiling…From now on, this is it. Humans will never get older than 115.”

A slew of billionaire investors falls into the dissenting camp. They’re starting companies and funding research with the goal of making death optional, reported The New Yorker.

“Death is an old technology but, like the umbrella, it has endured…Most of the billionaires who have waged the war against ageing and death are from Silicon Valley because they are the sort of people who have been trained to believe that a problem, because it is a problem, must have a solution.”

While human longevity is interesting to think about, it also has some practical applications. For instance, the life expectancy chosen for a retirement plan should be carefully considered. It influences the amount saved, the investments chosen, and the retirement income withdrawn.

If you would like to talk about your retirement and how it factors into your financial plans, give us a call.

“It’s paradoxical, that the idea of living a long life appeals to everyone, but the idea of getting old doesn’t appeal to anyone.”
--Andy Rooney, American journalist

* These views are those of Carson Group Coaching, and not the presenting Representative or the Representative’s Broker/Dealer, and should not be construed as investment advice.
* This newsletter was prepared by Carson Group Coaching. Carson Group Coaching is not affiliated with the named broker/dealer.
* Government bonds and Treasury Bills are guaranteed by the U.S. government as to the timely payment of principal and interest and, if held to maturity, offer a fixed rate of return and fixed principal value. However, the value of fund shares is not guaranteed and will fluctuate.
* Corporate bonds are considered higher risk than government bonds but normally offer a higher yield and are subject to market, interest rate and credit risk as well as additional risks based on the quality of issuer coupon rate, price, yield, maturity, and redemption features.
* The Standard & Poor’s 500 (S&P 500) is an unmanaged group of securities considered to be representative of the stock market in general. You cannot invest directly in this index.
* All indexes referenced are unmanaged. Unmanaged index returns do not reflect fees, expenses, or sales charges. Index performance is not indicative of the performance of any investment.
* The Dow Jones Global ex-U.S. Index covers approximately 95% of the market capitalization of the 45 developed and emerging countries included in the Index.
* The 10-year Treasury Note represents debt owed by the United States Treasury to the public. Since the U.S. Government is seen as a risk-free borrower, investors use the 10-year Treasury Note as a benchmark for the long-term bond market.
* Gold represents the afternoon gold price as reported by the London Bullion Market Association. The gold price is set twice daily by the London Gold Fixing Company at 10:30 and 15:00 and is expressed in U.S. dollars per fine troy ounce.
* The Bloomberg Commodity Index is designed to be a highly liquid and diversified benchmark for the commodity futures market. The Index is composed of futures contracts on 19 physical commodities and was launched on July 14, 1998.
* The DJ Equity All REIT Total Return Index measures the total return performance of the equity subcategory of the Real Estate Investment Trust (REIT) industry as calculated by Dow Jones.
* Yahoo! Finance is the source for any reference to the performance of an index between two specific periods.
* Opinions expressed are subject to change without notice and are not intended as investment advice or to predict future performance.
* Economic forecasts set forth may not develop as predicted and there can be no guarantee that strategies promoted will be successful.
* Past performance does not guarantee future results. Investing involves risk, including loss of principal.
* You cannot invest directly in an index.
* Stock investing involves risk including loss of principal.
* Consult your financial professional before making any investment decision.