U.S. stock markets delivered their own version of fireworks to celebrate the New Year. During the first week of 2018, the Dow Jones Industrial Average hit a new all-time high, moving above 25,000 for the first time ever. The NASDAQ Composite and Standard & Poor’s 500 Indices also rose to new highs.

2018 is off to an impressive start, but let’s pause for a moment and take a look back at 2017. It was a memorable year for global markets, but there are other reasons it was interesting, too. Here are the highlights of a few of The Economist’s most popular articles during the year:

• The world’s most valuable resource is no longer oil, but data (May 6). One-half of the most valuable companies in the world are American technology firms. Some, including The Economist, are concerned about tech companies’ market power and dominance of consumer data.

• Governments may be big backers of the blockchain (June 1). Blockchain may seem complicated and difficult to understand, but it may become a part of everyday life. “…a blockchain expert at the Massachusetts Institute of Technology argues that governments will drive its adoption – an ironic twist for something that began as a libertarian counter model to centralized authority. Backers say it can be used for land registries, identity-management systems, health-care records, and even elections.”

• The death of the internal combustion engine (August 12). Rapidly changing battery technology and electric motors, in tandem with self-driving systems and ride sharing, may mark the beginning of the end for the internal combustion engine. It’s a change that is likely to disrupt markets and industries. The silver lining may prove to be less traffic and improved air quality.

• How to keep cool without costing the earth (February 11). Scientists at the University of Colorado in Boulder have “…invented a film that can cool buildings without the use of refrigerants and, remarkably, without drawing any power to do so. Better yet, this film can be made using standard roll-to-roll manufacturing methods at a cost of around 50 cents a square meter.”

There is a theme that appears to run through many of these articles. They explore new ways of doing things, such as cooling buildings and transporting people. The articles discuss the growing value of consumer data, which many people provide to companies for free, as well as technologies that may allow people to protect and monetize their data in the future (blockchain).

These new developments may be part of a process called creative destruction, which is a process of innovation that includes the introduction of new products and services that may eclipse existing ones. You don’t have to look far to find examples. Just think about the evolution of movie rentals, photography, or phones during the past couple decades.

Creative destruction was introduced in 1942 in Joseph Schumpeter’s book, Capitalism, Socialism and Democracy. He believed it was the essential fact about capitalism. More recently, MIT Professor Ricardo Caballero wrote, “Over the long run, the process of creative destruction accounts for over 50 percent of productivity growth.”

It seems, as Schumpeter suggested, we live in a gale of creative destruction. 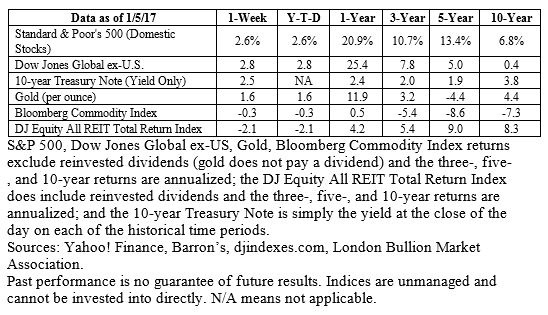 CRYPTOCURRENCY MAY BE EXPENSIVE IN UNEXPECTED WAYS. If you’re like many investors, you have probably spent some time thinking about the latest innovation in money: cryptocurrency. Cryptocurrencies, or digital tokens, are ‘mined’ using computer networks to solve complex puzzles. The Economist provided an example:

“A huge aircraft hangar in Boden, in northern Sweden, big enough to hold a dozen helicopters, is now packed with computers – 45,000 of them, each with a whirring fan to stop it overheating. The machines work ceaselessly, trying to solve fiendishly difficult mathematical puzzles. The solutions are, in themselves, unimportant. Yet by solving the puzzles, the computers earn their owners a reward in bitcoin, a digital ‘crypto-currency.’”

A hangar of computers is a lot of overhead expense, and it’s not all that’s needed to mine digital tokens, either. Experts in the field told The Washington Post mining a popular cryptocurrency, “…probably uses as much as 1 to 4 gigawatts, or billion watts, of electricity, roughly the output of one to three nuclear reactors.”

Weekly Focus – Think About It
“I offered a definition of bubble that I thought represents the term’s best use: A situation in which news of price increases spurs investor enthusiasm which spreads by psychological contagion from person to person, in the process amplifying stories that might justify the price increase and bringing in a larger and larger class of investors, who, despite doubts about the real value of the investment, are drawn to it partly through envy of others’ successes and partly through a gambler’s excitement.”
–Robert Shiller, American Nobel Laureate and Professor of Economics

* These views are those of Carson Group Coaching, and not the presenting Representative or the Representative’s Broker/Dealer, and should not be construed as investment advice.
* This newsletter was prepared by Carson Group Coaching. Carson Group Coaching is not affiliated with the named broker/dealer.
* Government bonds and Treasury Bills are guaranteed by the U.S. government as to the timely payment of principal and interest and, if held to maturity, offer a fixed rate of return and fixed principal value.  However, the value of fund shares is not guaranteed and will fluctuate.
* Corporate bonds are considered higher risk than government bonds but normally offer a higher yield and are subject to market, interest rate and credit risk as well as additional risks based on the quality of issuer coupon rate, price, yield, maturity, and redemption features.
* The Standard & Poor's 500 (S&P 500) is an unmanaged group of securities considered to be representative of the stock market in general. You cannot invest directly in this index.
* All indexes referenced are unmanaged. Unmanaged index returns do not reflect fees, expenses, or sales charges. Index performance is not indicative of the performance of any investment.
* The Dow Jones Global ex-U.S. Index covers approximately 95% of the market capitalization of the 45 developed and emerging countries included in the Index.
* The 10-year Treasury Note represents debt owed by the United States Treasury to the public. Since the U.S. Government is seen as a risk-free borrower, investors use the 10-year Treasury Note as a benchmark for the long-term bond market.
* Gold represents the afternoon gold price as reported by the London Bullion Market Association. The gold price is set twice daily by the London Gold Fixing Company at 10:30 and 15:00 and is expressed in U.S. dollars per fine troy ounce.
* The Bloomberg Commodity Index is designed to be a highly liquid and diversified benchmark for the commodity futures market. The Index is composed of futures contracts on 19 physical commodities and was launched on July 14, 1998.
* The DJ Equity All REIT Total Return Index measures the total return performance of the equity subcategory of the Real Estate Investment Trust (REIT) industry as calculated by Dow Jones.
* Yahoo! Finance is the source for any reference to the performance of an index between two specific periods.
* Opinions expressed are subject to change without notice and are not intended as investment advice or to predict future performance.
* Economic forecasts set forth may not develop as predicted and there can be no guarantee that strategies promoted will be successful.
* Past performance does not guarantee future results. Investing involves risk, including loss of principal.
* You cannot invest directly in an index.
* Stock investing involves risk including loss of principal.
* Consult your financial professional before making any investment decision.