It was a good week to own stocks.

Not all financial news was good news last week, but that didn’t prevent U.S. stock markets from moving higher. Barron’s reported on the good news:

“This past week, welcome political news from Europe, a batch of stellar corporate-earnings reports, and a concrete tax proposal to cut corporate and some personal rates sharply gave the bull even more reasons to rally. By Friday’s close, the Dow Jones industrials and other market measures were standing near all-time highs.”

Overall, corporate earnings were quite strong during the first quarter of 2017, according to FactSet. With 58 percent of the companies in the Standard & Poor’s 500 Index reporting in, earnings are showing double-digit growth for the first time since 2011.

Economists had less to celebrate. The Commerce Department’s first estimate indicated the U.S. economy got off to a slow start during 2017. Gross domestic product (GDP), which measures the value of all goods and services produced, came in below expectations and grew at the slowest rate in three years. Bloomberg reported:

“The GDP slowdown owes partly to transitory forces such as warm weather and volatility in inventories, which supports forecasts for a rebound as high confidence among companies and consumers and a solid job market underpin growth. Even so, the weakness at car dealers could weigh on expansion, and further gains in business investment could depend on the extent of policy support such as tax cuts.”

Keep an eye on Congress and the Federal Reserve. Changing fiscal and monetary policies are expected to have a significant influence on markets and the economy. 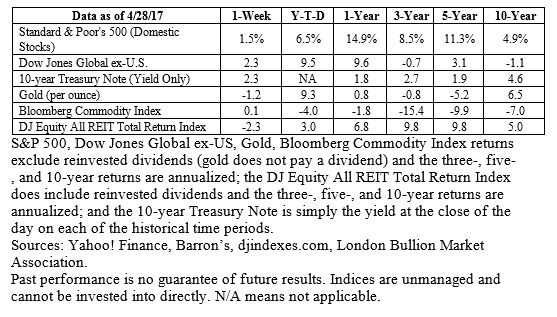 WHAT DID YOU SAY? If you find yourself tuning-out in loud restaurants, asking people to repeat themselves frequently, or cupping an ear in an effort to better understand what a friend or colleague is saying, then you may be interested to learn that hearing loss is one of the most prevalent health issues for older Americans. It ranks third, right behind arthritis and heart disease, according to the Hearing Loss Association of America (HLAA).

“A study by the Journal of General Internal Medicine, which covered over 90,000 veterans of Afghanistan and Iraq seeking VA care from fiscal 2006-2007, may serve as a general guide. Among male veterans seeking VA care, 16.4 percent to 26.6 percent suffer from serious hearing loss and tinnitus, and 7.3 percent to 13.4 percent of female veterans are affected. How much of this is combat-related or due to environmental factors such as background noise, training, and even medication is unknown.”

Remarkably, many people ignore their hearing loss. Just 16 percent of Americans (age 69 or younger) with hearing issues use hearing devices. It’s a decision that can have serious consequences since studies have linked hearing loss and cognitive decline, reported NPR.

The real selling point may prove to be that PSAPs are far less expensive than traditional hearing aids.

“Most of the successful people I've known are the ones who do more listening than talking.”
--Bernard Baruch, American financier and statesman

* These views are those of Peak Advisor Alliance, and not the presenting Representative or the Representative’s Broker/Dealer, and should not be construed as investment advice.
* This newsletter was prepared by Peak Advisor Alliance. Peak Advisor Alliance is not affiliated with the named broker/dealer.
* Government bonds and Treasury Bills are guaranteed by the U.S. government as to the timely payment of principal and interest and, if held to maturity, offer a fixed rate of return and fixed principal value. However, the value of fund shares is not guaranteed and will fluctuate.
* Corporate bonds are considered higher risk than government bonds but normally offer a higher yield and are subject to market, interest rate and credit risk as well as additional risks based on the quality of issuer coupon rate, price, yield, maturity, and redemption features.
* The Standard & Poor's 500 (S&P 500) is an unmanaged group of securities considered to be representative of the stock market in general. You cannot invest directly in this index.
* All indices referenced are unmanaged. Unmanaged index returns do not reflect fees, expenses, or sales charges. Index performance is not indicative of the performance of any investment.
* The Dow Jones Global ex-U.S. Index covers approximately 95% of the market capitalization of the 45 developed and emerging countries included in the Index.
* The 10-year Treasury Note represents debt owed by the United States Treasury to the public. Since the U.S. Government is seen as a risk-free borrower, investors use the 10-year Treasury Note as a benchmark for the long-term bond market.
* Gold represents the afternoon gold price as reported by the London Bullion Market Association. The gold price is set twice daily by the London Gold Fixing Company at 10:30 and 15:00 and is expressed in U.S. dollars per fine troy ounce.
* The Bloomberg Commodity Index is designed to be a highly liquid and diversified benchmark for the commodity futures market. The Index is composed of futures contracts on 19 physical commodities and was launched on July 14, 1998.
* The DJ Equity All REIT Total Return Index measures the total return performance of the equity subcategory of the Real Estate Investment Trust (REIT) industry as calculated by Dow Jones.
* Yahoo! Finance is the source for any reference to the performance of an index between two specific periods.
* Opinions expressed are subject to change without notice and are not intended as investment advice or to predict future performance.
* Economic forecasts set forth may not develop as predicted and there can be no guarantee that strategies promoted will be successful.
* Past performance does not guarantee future results. Investing involves risk, including loss of principal.
* You cannot invest directly in an index.
* Consult your financial professional before making any investment decision.
* Stock investing involves risk including loss of principal.